Now we know what Zoé does when she gets bored.

She makes up a world of high-flying acrobats, wickedly insane costumes and a headless, umbrella-wielding person who likes to keep a low-profile. One would think Zoé was taking an acid trip – but that is not the case. Zoé is used to being ignored by her parents, and with a little help of her imagination, she created this new world.

This world is known simply as Quidam, which means a nameless passer-by.

And that’s the name of Cirque du Soleil’s latest performance ,which enthralled fans at the PNC Arena in Raleigh during it’s stay from July 10-14. 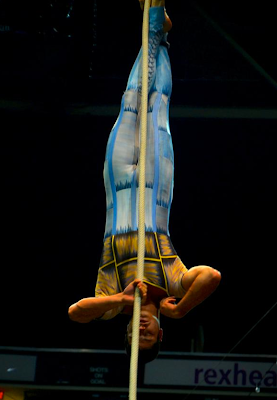 I was fortunate enough to be invited to PNC prior to opening night on July 10 to witness the behind-the-scenes magic. When I arrived, I was introduced to Cirque’s publicist Jessica Leboeuf, who escorted me backstage to see how the performers unwind prior to a show.

There were a lot less “props” backstage in Quidam than there was with Dralion, the last time I was also backstage. But as Leboeuf points out to me, Quidam is more about people than with Dralion, which featured large Chinese creatures which were, you guessed it, part dragon and part lion.

This time around, a lot of the performers were stretching and getting loose on a large blue mat which made its home right behind the backstage curtains. Men and women contorting their bodies in ways that, if I tried that at home, someone would be calling 911 to take me to the hospital.

Out on the main stage, which I was informed takes 10 hours to erect, a handful of performers worked on their routine. It was amazing seeing the men and women climb up these 30-foot ropes and twirl, spin and drop with such ease. 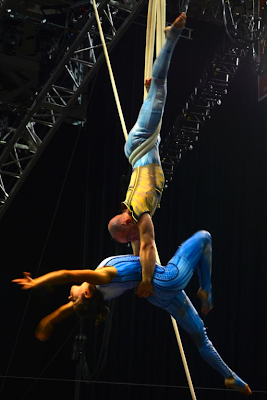 That same night I was able to catch the show, and I must say I was impressed. Half the time I didn’t know what the plot was, but the 45 performers who come out on stage really knew how to keep the crowd entertained.

This is only my third Cirque du Soleil show I’ve seen in my lifetime, but hopefully there will be others … maybe the next time I go to Las Vegas!

Well, that was never said once at the latest Falls River Wine & Beer Club event – but the tradition of France was in our hearts.

And generous portions indeed. For a $10 tasting fee, guests at the store were able to indulge in 2 whites and 3 reds – each sample was at least a 3 oz. pour. It was a nice way to get people in the mood to chat.


Around 25 people came in for the tasting, which was announced by the club through the  community website, Nextdoor, and by means of the wine clubs Facebook page.

The wine club, which is the second Thursday of each month, has a rotating theme of in-house and off-site locations. The club’s first in-home event featured wine and beer courtesy of Wine 101 out of Wake Forest.

Upcoming events are to feature a sparkling wine tasting;  the wines of Argentina; wines and beers for Oktoberfest and a chocolate and stout tasting.

As far as the French wines that kept the crowd entertained for the Bastille Day celebration, they included a 2011 La Craie Vouvray; 2011 Domaine des Trois Toits; 2011 La Cuvee du Chat Beaugolais; 2010 Les Parcelles Bordeaux and a 2011 Plateau des Chenes (which was by far the crowd favorite).