Finding Love at SPCA's Bark & Wine With Your Valentine Thursday, Feb. 12 we began our Valentine’s Day celebrating early with the furry ones at the SPCA of Wake County’s 10th Anniversary 2015 Bark & Wine with Your Valentine event, held at the Curtis Dail Pet Adoption Center in Raleigh.  This sold out event to benefit the SPCA of Wake County had food donated by 18 Restaurant Group, Mitchell’s Catering and Trader Joe’s and with wine and beer donated by Mim’s Distributing Company. The evening was abuzz with animal lovers up close and personal with four-legged Valentines.

There was no better way to embark on the holiday weekend of love than with puppy kisses and feline balls of fur!  Upon arrival we promptly affixed our name tags, were handed our 10th Annual Bark & Wine commemorative wine glass sponsored by BottleMixx, served a sample of a 2011 Campo Lindo Tempranillo and went directly to the Cat Adoption wing to visit with the kitties.

What I loved about the event was that it affords one the opportunity to spend time with the pets up for adoption.  However, I am sure that some of the cats would disagree, as their world of quiet and calm just got turned upside down as was evidenced by one grumpy black cat named Miles who promptly turned away from all visitors!  He wasn’t the only grumpy kitty we encountered that evening.  Lucky for us, we’re cat people and understand “cattitude” and just laughed it off!

As we made our way through the Cat Adoption Wing, we met so many wonderful felines looking for their forever home. There was a precious pair, Minnie and her brother Mickey, who, unfortunately had to wear the ”cone of shame” due to a scratched cornea. But what a sweetheart!  Rambunctious kittens were tearing around playing with their toys without a care in the world as they were surrounded by smiling faces peering into their rooms. I also had a mission this evening.  After losing two of my precious feline fur babies in two years, leaving behind our other two ... was it time for us to adopt again? I most definitely had an ulterior motive!  And alas, I found love this Valentine’s Day with a little black and white girl named Nirvana (see below). We mustn’t forget the dogs and puppies.  Still on my mission for a new companion ... was a dog in our future? The excitement dogs portray is indescribable as they wag their tails and almost smile when they see a new face. Yet again, we met some absolutely amazing dogs up for adoption.  There was Candace, a three year old black lab/hound who is just a love. And then we met Miriam, a 1 year old brown brindle Dutch Shepherd. She was our favorite dog of the night, but apparently we weren’t the only ones who thought so – as I noticed she was adopted the next day! Great news for Miriam! And a decision made for us. And then there were the puppy kisses!  Oh my! If I honestly thought I could handle raising a puppy as well as an 11-and 12-year old cats and all live in harmony, I would not think twice.

If you are considering adopting a pet, Triangle Around Town recommends checking out the SPCA of Wake County. Whether we embark on that journey of adoption again remains to be seen, but if and when we do, we will be making the trip to Garner in search of our next member of the family. 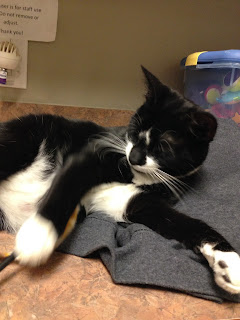 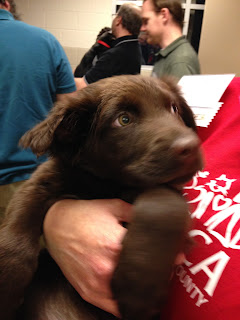 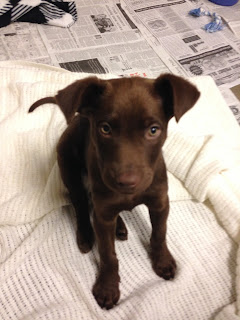 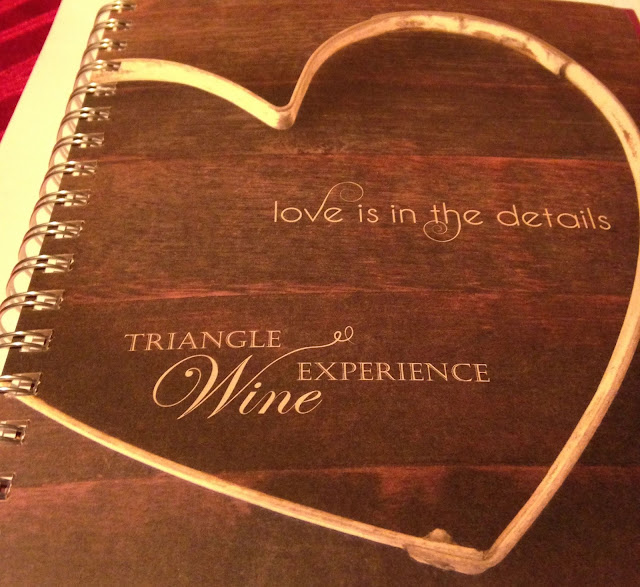 “Let us celebrate the occasion with wine and sweet words.”  – Plautus

And so we did at the 22nd annual Triangle Wine Experience Gala, held on Feb. 7 to benefit The Frankie Lemmon School. The Grand Gala and auction were the finale to three days of wine events – from wine dinners, trade tastings and tastings with the wine makers at select merchants – which all ended with the Grand Gala. The Gala was held in Research Triangle Park, with proceeds of the weekend to benefit the Frankie Lemmon Foundation.

We were unable to attend any of the wine dinners this year, but hope to in years to come. Several restaurants opened their doors on Thursday, Feb. 5, as wineries and sponsors hosted the evening with the Triangle’s finest chefs for a delectable meal paired with the finest wines.


Friday evening, some wine makers took their show on the road, along with some of their finest wines, to local wine merchants who hosted the ‘Sip, Shop & Sign’ events open to the general public and offering an opportunity to sample some outstanding wines from California.

Triangle Around Town made it out to Raleigh Wine Shop on Glenwood Avenue for the wines of Nile Zacherle. Niles was a fantastic host as he talked about each wine he poured – including at $200 bottle of David Arthur 2012 Elevation 1147. Other shops who hosted were Apex Beverage Co., Chapel Hill Wine Company, Great Grapes, Taylor's Wine Shop, Total Wine & More and Triangle Wine Company. There just wasn't enough time in the evening to get to all of them!

Saturday evening, however, is when it all came together for the Grand Gala. The event was held inside an empty warehouse in Research Triangle Park. The room was lined with wine makers and chefs offering samplings of their food.  We even found the occasional brewery mixed in offering some beer samples. We perused the silent auction items, many of which were also wine related and so tempting to place that bid.


We began our trek around the room to decide on what wines we would try and we decided to stay mostly with red wines and tried to never indulge too much! One of the first people we ran into was, none other than, Niles from the night before. I have to say, we’ve attended this event a few times now, and all the wine makers we’ve met have been so friendly and talk so highly of this event and of the Triangle in general. Leave it up to good ole Southern hospitality! We ran into Scot Covington of Trione Winery out of California, and talked to him for awhile with his local distributor, Mike Miller of Big C Wines. This was Covington’s first Triangle Wine Experience and was just in awe of what a fantastic event this was.

As we made our way around the room we noticed some familiar faces, from Eliza Kraft Olander, who is the brains behind this event, to NC Attorney General Roy Cooper and restaurateur Ashley Christensen, who is also on the planning committee for this event.  It is so nice to see so many out to support and raise money for the Frankie Lemmon Foundation.


We made our way to our table for the live auction, I was curious to see what items were up for bid this year. The paddles were flying and money was most definitely being raised this night with the highest bid being $40,000. That top bid was an evening with Jonathan Cain, keyboardist for the 80s band, Journey, which included a private concert and dinner at Eliza Kraft Olander’s home.

This event was a collaboration of roughly 49 wineries, with the majority from Napa Valley, 30 restaurants and around 40 sponsors.  I look forward to this event every year – as I will again in 2016.