A Tour and Tasting at Williamsburg Winery: Where Wine Meets History 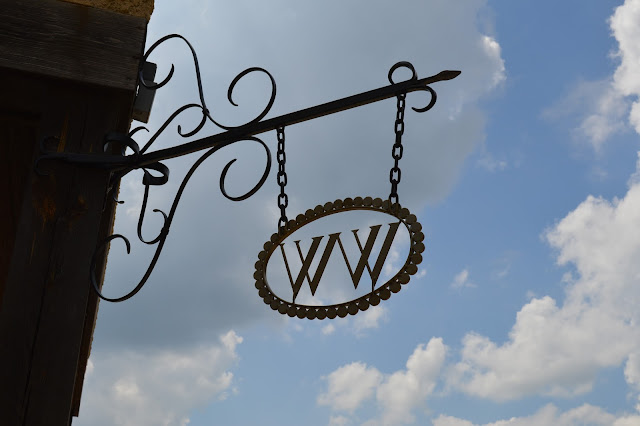 
In search of a summertime weekend getaway, we visited the Williamsburg Winery in Williamsburg, Virginia for their Extensive Tour and Reserve Wine Tasting. Having done this tour and reserve tasting in the past, we knew we would be in for another treat that only the Williamsburg Winery can deliver. This particular tour and tasting is limited to 8-10 people, must be reserved and purchased in advance, and the tasting takes place in the private wine cellar. It’s an experience not to be missed if you are an avid wine lover.

For anyone visiting Williamsburg, you know it's rich in American history and the site of the winery is no exception. Our day began with lunch at the Gabriel Archer Tavern, named after Gabriel Archer. Archer was 2nd in command, when in 1606, three ships were sent to the New World to settle a permanent English colony. 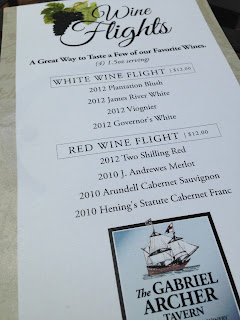 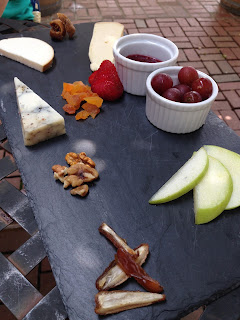 Throughout the winery, the history talks to you through the names of the wines produced. The James River White, Governor's White, Susan Constant Red, Acte 12 Chardonnay and of course, the Gabriel Archer Reserve - to name a few. What better way to experience history than with a glass of wine.

We have lunch at the Gabriel Archer Tavern just about every time we visit the winery and can honestly say we've never been disappointed. With a glass of our favorite, the Governor’s White, we shared a cheese plate and grilled chicken sandwich before walking across to the winery to check in for our tour.

At 1 p.m., we were promptly met by our tour guide, Jack Crane, as well as two other ladies who were also on our tour. Jack took us out to the vineyard on the 300-acre farm, known as Wessex Hundred, where he discussed the history of the winery, the land it resides on and of course the seven different types of grapes grown on the estate.  From there, we were taken to the crush pad where Jack explained the process the grapes go through up to fermentation.  Next up, the museum where Jack taught us about the evolution of the wine bottle, the history of the estate and other tidbits of information worth saving for your own visit one day!

We toured the wine cellar and Jack explained the bottling process and alas, we have arrived at our private wine cellar for our private tasting of the winery’s finest – the reserve and premium wines. Don’t get me wrong, the tour is not to be missed, but I was anxiously awaiting the tasting and with a group of four, it made it even more intimate … and fun!

The four of us sat at the tasting table, and with Jack leading the way, we were presented with a cheese plate and 9 bottles of wine calling our name as we waited for our first taste. We started with the Wedmore Place Cremant de Loire which is made especially for Williamsburg Winery by their partners at Chateau de la Presle. Being a sparkling wine fan, this one was one of my favorites of the day.

We went down the list from whites to reds and finishing with a Late Harvest Vidal Blanc. We were able to taste a side-by-side 2010 Merlot Reserve followed by a 2006 Merlot Reserve as well as a 2010 Gabriel Archer followed by a 2009 Gabriel Archer. A favorite of mine, retailing between $75-$100 per bottle, was the 2009 Adagio, which is a blend of Petit Verdot, Cabernet Sauvignon and Cabernet Franc. This year, the 2010 Adagio was awarded the Virginia Governor’s Cup as the overall winner of the competition.

Included in this tour, guests receive a large etched reserve wine glass, however, on this day they were out so we were given vouchers to come back for their regular tour and tasting. Being from out of state, but also keeping our wine and beer club in mind, we decided to return the next day for the additional tour so we may give our members a “side-by-side” comparison. So, the next day, we returned and began our visit once again with lunch at the Gabriel Archer and then off to the tour and tasting. This tour typically is $10 per person.

We were pleasantly surprised to learn that Jack, from the day before, would be our tour guide once again!  The tour begins with a 5-minute video of the history of the winery.  Next, Jack took us down to the wine cellar where he talked about the barreling, aging and bottling process.  Up the spiral staircase we landed back in the museum and then onward to the tasting room. Once in the tasting room, we sampled 7 wines, ranging from whites to reds to a choice of Vin Licoreux de Framboise or the Jamestown Cellars Spiced Wine. The Framboise was to die for, while the spiced wine is great for the holidays. These wines all retail from $9 to $18 per bottle. 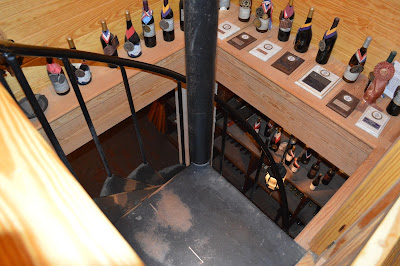 The difference between these tours are on the reserve tasting you are able to go to the vineyard, see the grapes, learn about them and hear the history, whereas on this other tour, the video took the place of the personal touch.  On the reserve tasting you are trying the better produced wine – the reserve and premium – and in a private wine cellar with atmosphere and intimacy. On this tasting and tour, you are fortunate to try wines, that some might say, are more affordable.

Do I have a preference? I like “atmosphere” so I would choose the reserve.  However, being budget-minded, the tour and tasting on the second day did allow us to decide what we liked and could walk out the door with a case of Williamsburg wines. To each their own, I say!

Raleigh's Sub Noir Brewing celebrates year one with a bang

Celebrating its 1-year anniversary party on June 14, I have to give respect to Sub Noir Brewing Company's Michael and Amy Stagner for blessing us with some fantastic craft beers during its first 365-days in existence.

When you first walk into Sub Noir Brewing, one would think that the gang has a lot to do when it comes to decorating. The brewery has no bar or extravagant barstools and the beer comes out of a chest freezer which has been crafted into a kegerator. They don't have that charming allure of some of the other local breweries – but don't let this fool you! The beer crafted here can stand up next to some of the heavy-hitters in the craft beer world.

And it doesn't hurt to have somewhat of a "cult" following behind the brewery. While only producing small barrel runs, fans of Sub Noir have to pay close attention to Twitter or Facebook as to when the next special beer will be flowing, such as the sour Flanders Red Ale in a cask barrel, which lasted under an hour before it was all gone during it's 1-year anniversary.

Jen and I arrived early to have a pint of Zee Count, a chocolate stout brewed with Count Chocula and aged over cocoa nibs courtesy of Raleigh's own Videri Chocolate Factory. I also tried a pint of the ginger tripel named, Eccentrica. Unfortunately I didn't get an opportunity to try the double IPA, aptly titled "D-Bag" for the trouble Michael and my friend David had with the hops during brewing. Maybe next time, guys.

On that rather humid afternoon, many people gathered in lawn chairs drinking beer outside under canopies, while food trucks supplied the nourishment. Uban Entree, Dump Pho King and Not Just Icing Cupcakes were available through the day, bringing everything from fried pork-chop sandwiches to pork dumplings.

Cheers to the gang at Sub Noir Brewing Company ... I hope to be there when you celebrate year number two.