If you haven’t been to one of Wine 101’s “wine classes” it would be in your best interest to do so in the future. Both the Raleigh and Wake Forest locations have scheduled classes, where you learn about a wine region from knowledgeable hosts, as well as trying some great wines. Last time we attended a class on Argentine-style wines, and on Jan. 29 we were lucky enough to attend the Loire Valley Wine Class taught by Authentique Vin’s Thomas Meunier.

Meunier, whose business is based out of Carrboro, has a fine portfolio of wines that range from some of the most popular regions in France. We’ve all heard of Alsace, Burgundy, Bordeaux and Rhone Valley – but today, we learned and tasted wines from the vast Loire Valley. Jennifer and myself, along with our friend Gina, took some notes during our class and here’s what we have to say about the wine offered to us that evening.

Wine #1: 2012 Muscadet Sévre et Maine Sur Lie is produced by Jo Landron along with his wife, Jocelyn. This white wine, which was made with 100 percent Melon de Bourgogne, grows primarily in the Loire Valley region of France. Muscadet makes a perfect pairing with oysters or other shellfish. This wine has a well-balanced citrus flavor with a slightly less citrus to the nose. COST: $13.99

Wine #2: 2012 Chateau de Villeneure Saumur Chenin Blanc comes from a Jean-Pierre Chevallier owned property overlooking the Saumur region in France. This Chenin Blanc was a nice contrast from the Muscadet taste previously. With a very mineral and slight bit of saline lingering on the taste buds, this was a nice wine. These grapes are grown on chalky slopes in the Saumur. COST: $18.99

Wine #3: 2012 Domaine Gerard Fiou Sancerre Pinot Noir is a wine crafted of 100 percent Pinot Noir over 40-year old vines. The most expensive white wine on the lot for the evening, this wine has a rich, balanced taste with intos of black cherry fruits. COST: $27.99

Wine #4: 2013 Henry Marionnet Gamay Touraine Domaine de la Charmoise. Gamay is really an under appreciated grape. The grape usually gets most of its attention during the Beaujolais Nouveau season which falls in November. The estate of Domaine de la Chamoise has close to 85-acres which lines between the Loire and Cher rivers. Vines on this estate were planted between 1967 and 1978, making some of these vines almost 50-years old. The wine itself is a medium-bodied and pours ruby red to purple in the glass with a nose and palate of raspberry and cassis. COST: $15.99

Wine #5: 2013 Grosbois St. Nicolas de Bourgueil. This 100 percent Cabernet Franc was our favorite of the evening. The vines for this “jammy” red grow from the sand and gravel on the former Loire River bed. The wine itself has a nice floral nose, while the mouth is deep in berries, such as raspberry and strawberry. Great companions for this wine would include pizza, chicken, pork or even a charcuterie plate.  COST: $17.99

Wine 101's two locations will feature a Tuscan Wine Class on Feb. 25 at the Raleigh location and Feb. 26 at the Wake Forest location. Both classes start at 7:30 p.m., and the cost is $15 per person.
Email ThisBlogThis!Share to TwitterShare to FacebookShare to Pinterest
Labels: Local Features, Wine & Wineries 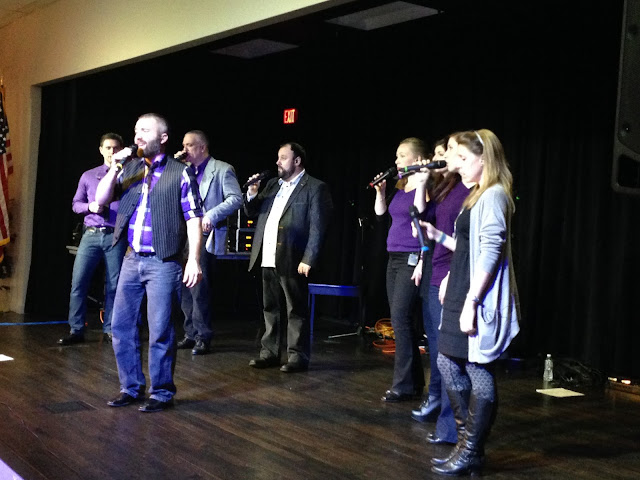 Art. It’s something I hold dear to my heart. I'm an artist. My day job is in the graphic design field. I enjoying writing. I use to be in a electronic band back in my high-school days in California. And my friends know that my artistic juices now flow into a eccentric collection of offbeat socks.

So it was a chilly night on Jan 24 when we showed our support to Wake Forest's community theater, Forest Moon Theater. That and our good friend, Joe O'Keefe, was going to pound out a few tunes behind the ivories.

Held at the Wake Forest Renaissance Center, friends and family filled the seats awaiting the Song Writers' Celebration. Theater Executive Director Bob Baird took center stage prior to the music and talked about the theater, how one can get involved and thanked everyone for coming out for the 60-minute performance.

Next was a few words from O'Keefe, who owns Wine 101 in Wake Forest, and has been involved in music most of his life. "I'm honored to be here and to support my community - which is Wake Forest," O'Keefe says. "This town has some good home town talent." Which the attendees will shortly witness for themselves.

First up was Chris Vickery – a talented musician who crooned out a total of four original pieces. Then it was O’Keefe, who performed from behind his keyboard some hits by a few of his influences – Billy Joel and Elton John. The final handful of songs came courtesy of Avante, an a cappella group.

Money raised from the sales of this performance will help Forest Moon Theater raise money for future projects. Some upcoming projects include The (Almost) Totally True Story of Hansel and Gretel, which the theater will be holding auditions for actors ages 8-18 on Feb. 21 and Feb. 22, at the Wake Forest Renaissance Centre.
Email ThisBlogThis!Share to TwitterShare to FacebookShare to Pinterest
Labels: Arts & Entertainment, Local Features

Got to be N.C.'s Competition Dining begins new season

Whether you're a true foodie or just someone who likes to go out and enjoy a friendly competition, opening night of Got to be NC's Competition Dining, held at 1705 Prime Catering and Events in Raleigh on Monday, Jan. 19, certainly did not disappoint.

On noon, the day of the competition, a secret ingredient is revealed to the two competing chefs. At that time, all chefs cell phones are confiscated, and they are no longer in contact with the outside world. Chef Ref Bobby Zimmerman stocks the mobile pantry with ingredients for the competitors, as they prepare to create the masterpieces for the evenings 120 guests. The rules are quite simple.  Each chef and his or her team creates three dishes – an appetizer, main course and dessert, using the secret ingredient and the guests, that’s right, the guests get to judge, alongside a panel of professional judges.

At the end of the evening, the votes are tallied up and a winner is revealed. He or she will then move on to the next round. The winner of each region will advance and compete in the Final Fire competition held in November. The prize? $2,000 and the honor of bragging rights as they don the “Red Chef Jacket.”

Triangle Around Town had the privilege of attending this year’s opening night in Raleigh. We arrived around 6 p.m., found our table, downloaded the Competition Dining app that would enable us to vote and casually made our way to the bar to check out the specials for the evening.

Dathan tried the Spicy Cucumber Lemonade made with TOPO, one of the special cocktails of the evening … while I settled for a glass of Cabernet.  I must say though, after tasting the cucumber lemonade I thought it was AMAZING!

As 7 p.m. neared, host Jimmy Crippen kicked off the evening by introducing the chefs, Chef Gerry Fong of New Bern, former winner of Fire on the Dock and of Cutthroat Kitchen fame versus Chef Benjamin Harris of Midtowne Grille in Raleigh.   The secret ingredient was unveiled as Johnston County Mangalista Ham. Honestly, I had never heard of Mangalista ham before but pork is pork, right?  Each course was served one by one, not knowing which chef prepared which dish, it was time to taste, savor and judge. So, how did I rank each dish?  It wasn’t easy!  Everything was absolutely amazing!  My highest score, however, was course 5, the milk chocolate custard, dark chocolate torte, buttermilk fluid gel, Mangalista ham salted caramel and fluff with a score of 83%.

This was an extremely close battle, with 3/100 of a point separating the two chefs!  The winner of Battle Johnston County Hams was  Chef Benjamin Harris from Raleigh’s Midtown Grill!  Chef Harris will move on to the quarter finals as he battles the winner of #CompDining NC Battle Shitake Mushrooms that was held Tuesday, Jan 20, Chef Ryan Conklin of Rex Healthcare on Feb 9 … same time, same place!