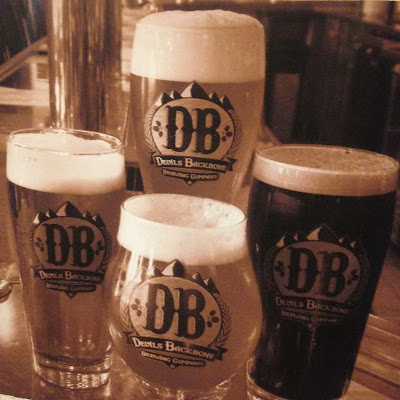 
Monday, August 17 was a special night – as a select number of beer-lovers made their way into the North Carolina Museum of Natural Sciences in Raleigh to sample beer from the Roseland, Virginia-based Devils Backbone Brewery. Jen and I were lucky enough to be invited to this event to see what the brewery has to offer.

The last time we were in Virginia, we picked up a six-pack of Devils Backbone's Azrael Belgian Golden Ale and were impressed. The beer had hints of pear, due to the yeast strain used.

As we were getting ready to go inside, we ran into our friends Glenn Cutler and Dave Tollefsen – or as most of you know them by ... the NC Beer Guys.

"We were wondering the type of turn out they were going to get tonight," Cutler says, as it seemed pretty quiet sitting outside Bicentennial Plaza, watching the many Devils Backbone employees scurry back-and-forth, getting ready for the event. Sooner rather than later, the four of us made our way inside, filled out our name badges, and took the escalator up to the second floor of the museum. Beer was flowing from three different locations upstairs, so we quickly worked our way to the back of the floor to try our first samples. First up was the Vienna Lager and the Eight Point IPA. The Vienna Lager clocked in at 4.9 percent ABV, and of course is a Vienna-style lager, that was made with Saaz hops and Vienna malts. A little too light for me, but a very crisp and refreshing beer, which will satisfy those who aren't looking for something heavy.

Next was the IPA. Coming in at 5.9 percent ABV and made using Cascade, Centennial, Chinook, Columbus and Simcoe hops, this IPA really hit the spot ... at least for me. We all know by now that Jen isn't a big IPA fan.

The crowd was starting to fill up, as more and more local bottle shop representatives started showing up. At one point we ran into Wine 101's beer managers Rufus Hoffman and Annette Henson, as they were talking to employees of Devils Backbone, probably setting up some beer deliveries to the locations in both Wake Forest and Raleigh.


Next we tried the Gold Leaf Lager and the 16 Point Imperial Ale toward the back of the room. Gold Leaf, one of the lightest beers in the breweries repertoire comes in at 4.5 percent ABV – while the 16 Point weighed in at 9 percent ABV. Now that's my kind of beer! While in line for our beer, we ran into Glenn Carr and Wendy Harris of Crafty Beer Shop in Raleigh, and talked about how we're anxious to try the 16 Point Imperial. Later that night, when running into Glenn, we asked about his verdict on the beer, and it was the same as ours ... amazing!

While we didn't get an opportunity to talk to everyone that night, we did see many local shops and stores taking in on the festivities, including The Glass Jug, Big Boss Brewing Co., Crank Arm Brewing Co., The Beer Dispensary, Triangle Wine Company, Taylor's Wine Shop, D's Bottle Shop, Total Wine and Harris Teeter.

Devils Backbone is coming to play hardball in the Triangle, and we wish them the best! And even though I wasn't able to squeeze it out of Devils Backbone's co-owner Steve Crandall, it seems that there might be a couple collaborations in the works with a couple of our Tar Heel breweries. We will keep our ears peeled ... and report to you when we can.

Sometimes it's hard for me to believe that it has been 31-years since the release of KMFDM's first album "Opium" back in 1984. Of course I wasn't listening to them that far back – I was only 12 when the release hit the streets. It wasn't until 1990 that I was introduced to KMFDM with the release of the album "Naive."

So when KMFDM passed through Raleigh on July 30 at the Lincoln Theater, I made sure I was there to see Sascha and the gang rip through a 20-song set featuring some of my favorite KMFDM ditties such as "Light," "Son of a Gun," "Tohuvabohu," "A Drug Against War" and "Godlike."

Here are 5 things that caught my attention during the show – take it for what it is. Even though I've been listening to the band for 25 years – I still have some gripes with them live.

THE CROWD: I was impressed with Raleigh's crowd. I've seen KMFDM in Charlotte in 2003 and in Chapel Hill in 2007 and the crowds back then just stood around like zombies. This time, several mini mosh-pits came into existence during the songs "A Drug Against War," "Tohuvabohu" and "Godlike."

SASCHA KONIETZKO: The only remaining founder of the band after 31 years. I wonder if he's sad about that, or he eventually forced out everyone. At one point in time, KMFDM had a great group of musicians writing and performing with the band: En Esch, Raymond Watts, Tim Skold, Bill Rieflin and Gunter Schultz ... now, all gone!

LUCIA CIFARELLI: She seems to be a hit to some – but doens't really do too much for me. Sure, if she belts out a powerful song, I enjoy it. But she's no En Esch or Raymond Watts. Both Esch and Watts had powerful vocals without the need to scream at the top of their lungs, which it seems Lucia has to do. But I guess there are some perks to being married to Sascha.

THE SONGS: Again, I love KMFDM's music, but I wish they'd do a little more restructuring or remixing of the songs they perform live. Most, if not all of the songs performed live, sound almost exactly like the album version – minus the ear drum buzz at the end of the night.

THE DRINKS: We all know that you pretty much have to take out a loan to drink alcohol once you step foot inside a concert venue – and it was no exception at The Lincoln Theater. We were spending $12 a pop to order a 16-oz. can of Bell's Oberon and a small vodka-cranberry. But at least it's not like going to Walnut Creek, where you spend $12 for one 23-oz. Budweiser Light. I do need to give props to the Lincoln for having a nice selection of craft beers sold by the can.