Chimney Rock: A relaxing time in the North Carolina mountains

If you live in North Carolina and ever find yourself in a 'mountains vs. beach' dilemma one weekend – Lake Lure and Chimney Rock are a great alternative – where beach meets the mountains. It's simply breathtaking. In one day, you can find yourself hiking up a mountain with an elevation of 2,480-feet – and later in the day, relaxing on the beaches of Lake Lure. We recently made a trip out to this area to do some exploring.


We enjoy hiking and getting back to nature. However, one must be in shape to take on the North Carolina mountains, and perhaps one of us was lacking a tad in that area, especially in the 90-plus degree, humid N.C. weather.

We set out Saturday morning with our backpacks packed and cameras ready! We knew the elevator, that takes you to the top of Chimney Rock, was down for maintenance indefinitely and were preparing ourselves for a good workout that day. With the elevator out of commission, the park is offering $2 off the admission price. I, however, quickly learned that this discount was because climbing 491 steps up to the top of Chimney Rock was not an easy accomplishment. I felt like I deserved a medal (or a margarita) by the time we were done. I did not envy those we passed going up as we were descending. I must say it's always easier going downhill than up the hill. We started out on The Outcroppings trail which ultimately takes you to the Chimney Rock. As we set off, we came across the Gneiss Cave, which is a small cave with stairs descending to the bottom.

Being a little claustrophobic, I was hesitant to embark on this first adventure we encountered.  The passageway was narrow and the ceilings low but, I took the plunge and went down into the cave. It was a cave, a nice, cool cave, and being a mere 5'2", I fit just fine with no claustrophobic anxiety attack!  So far so good. Onward we went up the stairs ... and up, up and up!

We came upon the Subway, the Grotto and to the Pulpit Rock, which all just reopened Memorial Day weekend. Just when you think you're at a dead-end at the Subway, we realized, there is just enough room to squeeze through and keep on going to more stairs!

We finally reached the top of the Chimney Rock and the 75-mile views were absolutely amazing!  It makes it all worth it. We sat down on some rocks and just took it all in for a bit before heading back up to The Opera Box.

The Opera Box holds a special place in our hearts because this is where, on October 5, 2007, we were engaged! This is an amazing place to just take a break and enjoy the views, and we did just that.  We took the obligatory "selfie," had a snack and ventured on as we followed the rock that said "that way" to the Skyline Trail. 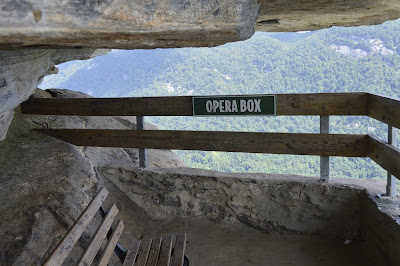 The Skyline Trail is said to be around a 20-minute, moderate-to-strenuous hike. We never timed ourselves, so I can't say exactly how long it took us, but of course, there were more stairs. We hiked up to the infamous Devil's Head and Dathan quickly asked "I wonder what would happen if his head fell off?"  Moving on, this trail ascends to the highest peak in the park, Exclamation Point, which sits 2,480-feet above sea-level.  We apparently missed the memo that you can see the Hickory Nut Falls from here (even though it is posted on the handy map we were given as we entered the park).  So, yeah, we didn't see it, nor look for it. After taking in the sights, it was finally time to descend down the mountain.

Once back down the mountain we decided to go ahead and do the Hickory Nut Falls trail. To reach the trail, you descend more stairs! At least it was going down, but my concern was, 'how we would get back up?'  My legs are now officially Jell-o!  This trail was a little more leisurely and about three-quarter mile one direction.  You are teased with there being a waterfall at the end! So, you keep on trucking. I hear there are indigenous plants and wildlife here.  I saw plants but I could not tell the difference from one to another and saw no wildlife that I can recall, which is a good thing because I do not think I would had the energy to run from a bear. At the end of the trail sits an amazing 404-foot waterfall. I would have loved to get up close and personal, but with my history of falling, I felt it best to avoid the slippery rocks and took in the beauty from afar. 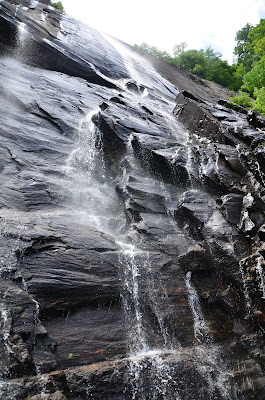 Overall, Chimney Rock park features five hiking trails of all levels with amazing views. Movies have also been filmed here such as "The Last of the Mohicans." The last 17-minutes of this film were actually filmed at the top of Hickory Nut Falls.

If you are looking for a good workout, Chimney Rock is for you!  However, I would personally recommend visiting in the Fall when the weather is a little cooler and the colors more vibrant.

Stay tuned for our next North Carolina hiking adventure, when we visit our favorite spot in the state, Grandfather Mountain, in the Fall.