Over A Glass: From Wall Street to Wine Street

“What’s happening in North Carolina is amazing and I’m so glad to be a part its story.” 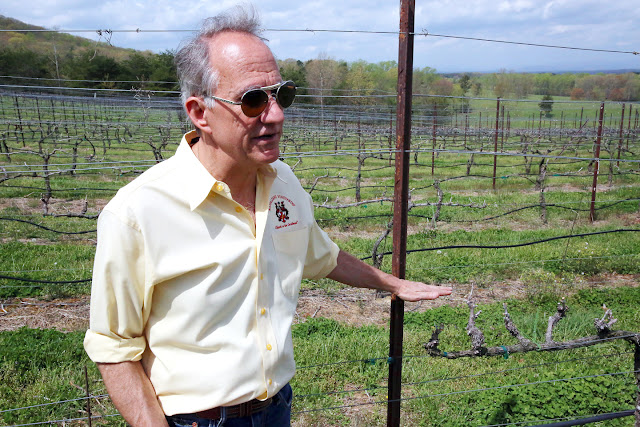 In our latest Over A Glass series, we caught up with Jay Raffaldini, owner of Raffaldini Vineyards and Winery in Ronda, North Carolina.

When one drives up to Raffaldini Vineyards, you are immediately swept away to another land – a vivid Italian villa that overlooks one of the most picturesque views in the Yadkin Valley – the Blue Ridge Mountains. Once inside you are greeted by a bevy of friendly staff, multiple tasting bars and stunning Italian-inspired North Carolina wines.

Triangle Around Town caught up with Jay one April morning to learn more about how he paved his path – from Wall Street to making wine here in North Carolina. The humble Raffaldini talked about his reasoning on starting the NC Fine Wines competition, as well as NC wines in general and the future of the industry as a whole.

What we learned as we spent time with Jay was how much pride he has in his business and his product. We started our interview inside the barrel room at the winery and eventually made our way over to the villa. While on our way to the villa down the dirt road, Jay asked for a ride and hopped in the backseat of our car. Our conversation lead to our upcoming trip to Napa and several recommendations Jay had for us. At the gate leading to the winery, he asked if we can pull over so he can close the gate behind us. As we were making our way up the path to the villa Jay stops to bend down and pull a few straggling weeds he saw out of the corner of his eye. On that particular day, we noticed some wasps swarming the front door of the villa and immediately he reached for his phone and wasted no time in handling the situation. Why did we notice these things and take note? Because this hands on approach to your business – whether it be a winery, a store or a service – this personal touch is something that we not only admire but what brings us back time and time again.

Below are excerpts from Triangle Around Town's interview with Jay Raffaldini.

IN THE BEGINNING ...
Raffaldini was born to Italian parents and raised in New York City. As part of his Italian heritage and upbringing, he developed an appreciation for vino, but not so much for the taste at a young age. What he eventually learned is that wine brings people together while forming a bonding sense of community.

He eventually went on to start a career on Wall Street where, taking lessons from his upbringing, would take his clients out for dinner and a nice bottle of wine. It was then where he began to develop a taste for the wonderful nectar. Following a positive career in the industry, hitting the age of 40 and some accumulated wealth, he decided it was time to look to his next transition in life – a winery.

The first step in starting any good winery is finding the prime location. In the year 2000 and with Jay being from New York state, he realized that going to the West was too far. The East coast at the time, only had three options, upstate New York in the Finger Lake region, Long Island and Virginia. "I loved reds so it kind of ruled out the Finger Lakes . And Long Island, the main grape is Cabernet Franc and I hate Cabernet Franc!" Raffaldini adamantly declares. He then turned his attention towards Virginia, which showed a lot of potential. But after some research, he discovered that before Prohibition, North Carolina was producing more wine than California. After hiring a consultant from Napa Valley, where they looked at 62 pieces of land, he decided to settle on Ronda, North Carolina.

ON CHOOSING NORTH CAROLINA ...
Deciding on North Carolina, Raffaldini states, "Here we have the chance to do something different ... and to be a leader." Currently, Raffaldini Vineyards is the fourth largest in the Tar Heel State, but if he were in California, the winery would be ranked in the 2,000s. As more outsiders with a passion for wine come to the state, they are identifying property suitable for this industry. "The last 10 vineyards started in North Carolina are all from out of town people. Why this is relevant is ... in North Carolina, we're saying, this place makes good wine." Jay predicts this area will explode in the next five or so years. In fact, he recently sold several parcels of land to two Raffaldini wine club members with the intent to move to the state to start their own wineries. When asked if he sees this as competition, he says, "No, I'm creating a destination." His sister also plans on opening a B&B, cottages and restaurant within the next 2-3 years right down the hill from the winery.


ON NC GRAPES ...
When asked about what grapes do well here in the state, Jay explains that it is the risk of being a pioneer. You simply don't know what will do well until you try. He goes on to use an analogy that falls in line with Wall Street. "If I bought a stock for $10 and it goes to $12, I should be buying more of it. If it goes to $8 I should not be buying it. If this grape is doing great, plant more of it. If this grape is doing badly, get rid of it."

ON COLLABORATIONS ...
The year 2017 introduced fans of Raffaldini to its first collaboration with JOLO Winery. RaRa Sisboombah is a mix between wine makers JW Ray and Raffaldini. When asked how this collaboration came about he says, "The reason we did this is we wanted to plant a flag that if you adhere and work together good things can happen." The relationship between JW and Jay is evident when you see them together – the camaraderie and friendship. Jay describes JW as 'very passionate,' and continues by adding, "It's not just about making wine, but collaborating and sharing success stories."

Related Story: Getting to know the man behind JOLO Winery

ON NC FINE WINE COMPETITION ...
Jay Raffaldini was the mastermind behind the NC Fine Wines Competition, which just completed its second year in 2018. "I started the NC Fine Wines by looking at what was done in Virginia. They were a little more strict with what they allowed. Here in NC, we let muscadine and grapes from out of the state in," says Raffaldini. But does he feel these awards will help the state gain some traction in the grand scheme of things? "Sure I do," he proclaims. "I think we need to win awards in other states such as Virginia and California to get the attention we deserve." Raffaldini holds firm that by doing so, down the road, in roughly 10 years, the state will grow from 150 vineyards to close to 500 vineyards. That's some wishful thinking. When you ask Jay if to be a true North Carolina wine, 100 percent of the grapes need to be grown here in the Tar Heel State. "Yes!" He passionately says. "The hard part about making wine is growing the grapes and the variation of grapes where they're grown is profound. The key to grow here is to have control of the output."

ON THE FUTURE OF THE NC WINE INDUSTRY ...
What's the next big thing for the NC wine industry? Well, Jay says the key is hospitality. The addition of lodging, restaurants and artisans. "For every $1 spent in Napa, $7 is spent on non-wine," he says. That's a profound statistic. But this future is encouraging guests coming from Raleigh and Charlotte to spend the night, stay for dinner and make it a weekend getaway rather than a day trip.

THE STORY OF THE BUMBLEBEE WINE ...
Raffaldini's Grande Riserva and the story of what is known as the bumblebee wine is a good one. We recently heard winemakers are described as artists and that's not hard to see, as each one we have met have their own creative side and how they create their masterpieces. Jay is also a great story teller and one of our favorites is the story of the bumblebee that graces the label of the Grande Riserva – a blend of Montepulciano, Petit Verdot and Sagrantino.

Click below for the video to hear Jay's story of this wine.