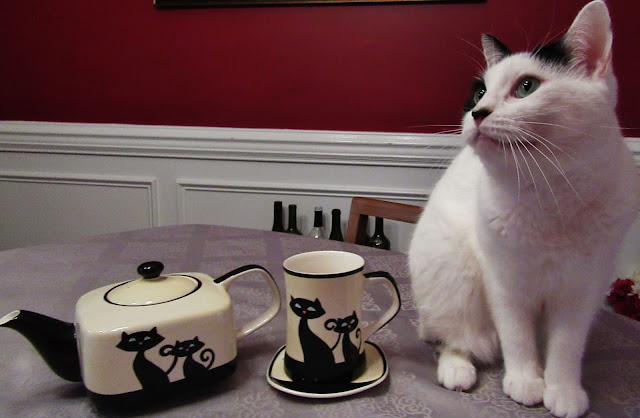 Over the past several years we've noticed a new trend with our furry little felines. And that trend is the rise in cat cafés across the U.S. - including right here in the Carolinas. Being cat lovers, and even having people suggest we ourselves entertain the idea of starting up our own cat café in the past, got us thinking. What exactly goes on at a cat café? Would our cat Waffles be invited in for a spot of tea or cup of coffee? It was time to investigate, the best we could, without having ever visited our first café - yet.

Step 1. What is a cat café? Where's the best place to start? Wikipedia, of course!

"A cat café is a theme café whose attraction is cats that can be watched and played with. Patrons pay a cover fee, generally hourly, and thus cat cafés can be seen as a form of supervised indoor pet rental."

As we dug a little deeper into the interwebs, we learned a lot about this latest trend, that made its emergence back in 1998, but mostly in China and Japan. The first North American cat café opened its doors in 2014 and since then, this phenomenon has taken off, including right here in the Triangle. And now, Sarah Newton and Arthur Hailey are planning to open the first ever cat café in downtown Raleigh, Purr Cup Café. There is also a cat café planned for Wilmington, The Scratching Post, as well as in Charleston, Pounce Cat Café, which will also be a wine bar.

To bring our readers the best inside scoop on this latest trend, we caught up with Sarah Newton to find out what they have planned for Purr Cup Café and exactly where they are in the planning stages. 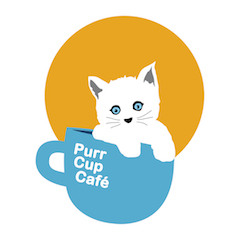 What made you decide you wanted to pursue opening a cat café in Raleigh and how do you think it will be received? Upon my retirement from my seven year ballet career with the Carolina Ballet, I wanted to devote myself to a meaningful project that would give back in some way. Ever since I learned that cat cafés existed and were popping up around the United States, I thought starting one would be the coolest thing ever. I left the ballet in May 2016, and since then cat cafés have continued to spread all over the country. This inspired me to just go for it. Raleigh is an exciting city that is friendly to new ideas and Raleigh, as well as the Triangle, has been growing so much I knew it was ready for a cat café. So far it has been received really well, so I can only imagine that will continue. Our number of social media followers has been steadily growing and everyone we talk to is super excited.

You are teaming up with Meow House Cat Rescue. How did this collaboration come about? We are lucky to have some great rescues in our area, and they are all awesome in their own way. I began reaching out to rescues a little over a year ago because I had some extra time on my hands over the summer and wanted to use that time helping cats. I was originally attracted to Meow House Cat Rescue because they were very flexible and had opportunities that fit my schedule. The more I got to know them, the more I loved them. They are a small organization and don't have any big money making events, but they give every cat a chance, no matter how "unadoptable" they may be. They take on many special cases and cats that need extra love and medical attention. They are also a foster based organization, so I knew the cat café would be a huge help in getting their cats more exposure and helping them find homes for more cats.

Approximately how many cats will be in the Cat Lounge at any given time? And will adoptions be conducted there as well? All the cats will be adoptable and the adoptions will be handled through Meow House. We will have nine cats in the lounge. Any more than that, and we will have to register and be inspected as a private shelter. We spoke to the person in charge of these inspections, and he was super helpful. He would be glad to help us out and advise us, but would recommend we stick to nine cats and avoid the official inspection.


What type of events do you foresee in the future that would feature the cats? The possibilities for awesome events involving cats is endless. Caturday morning cartoons, kitty story time, yoga classes, movie nights, trivia ... you name it, we will do it ... with cats! We will also host private parties in the cat lounge.

What menu items will you be featuring? Will you be hiring a barista? Any baked goods? I have barista experience, and we will be hiring additional baristas. We will have a full espresso bar, so people can get any of their usual coffee shop drinks such as lattes and cappuccinos. We will also offer drip coffee and cold brew. We have not made a final decision as far as which coffee roaster we will use, but we will be using something local. We will also have a large selection of non-coffee beverages such as teas and bottled sodas and juices. Our baked goods will come from local shops and will be fresh each morning. We will definitely have cat treats as well!

So there you have it, the Cat Café. Our first question was answered, "No, Waffles, you can't join us at the café!"

And don't forget, this endeavor would not be possible without adoptable kitties! Check out those awaiting forever homes by checking out Meow House on Facebook and Instagram.
Email ThisBlogThis!Share to TwitterShare to FacebookShare to Pinterest
Labels: Local Features
Newer Post Older Post Home