By Jennifer Primrose
Thursday, May 31

If you know your wine history, you know that Chateau Montelena in Calistoga, California, essentially put Napa Valley on the map! With that being said, we decided to pay a visit to the famous chateau during our vacation in California this past May. Walking up to the chateau is pretty impressive and breathtaking, and just knowing the antiquity behind the family and its legend made it one of our favorite stops.

We decided instead of reviewing the wines at Chateau Montelena, we would spend a moment to tell a little bit about the history behind the chateau and the people that put this wine and Napa on the forefront in the wine industry.

THE HISTORY OF CHATEAU MONTELENA

Chateau Montelena has a long history dating back to 1882, when Alfred Tubbs, a San Francisco entrepreneur, became the original owner of the winery, then named A. L. Tubbs Winery. In 1886 he brought on a French-born winemaker and constructed the English Gothic-style castle and by 1896 the winery was the seventh largest in Napa Valley. Then came Prohibition and subsequently, the end of the winery.

Post-Prohibition, Tubbs grandson, Chapin Tubbs, decided to continue with the legacy of growing grapes and making wine and in 1940 changed the name to Chateau Montelena. After Tubbs' death in 1947, the winery did not function again for two decades.

By the early 1970s the winery once again found itself under a new owner by the name of Jim Barrett. Today, the leadership continues under Jim's son, Bo Barrett.

THE JUDGMENT OF PARIS

The Paris Wine Tasting of 1976, or better known as the Judgment of Paris, has changed how Napa Valley wines were viewed against European and French wines.

The event took place on May 24, and put some of the best wines in France against, at the time, a little known region in California – Napa Valley. The judges included some of the best sommeliers in the business. In the white wine category, a total of four white Burgundy wines went toe-to-toe with six Chardonnays from California.

There was never any doubt amongst the judges that France would win hands down. In fact, only one journalist even bothered to show up for the event that day. And then came the surprise. The shock of all shocks! The winner of the blind white wine tasting was the 1973 Chardonnay from Chateau Montelena. But it didn't end there. California also won in the red category with a 1973 Cabernet Sauvignon from Stag's Leap Wine Cellars – once again beating the French. 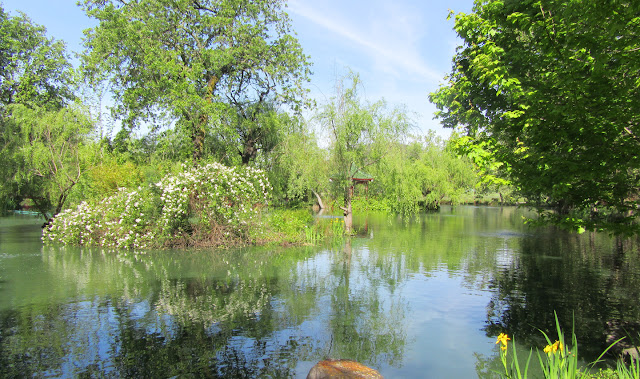 We can all thank a fellow by the name of Steven Spurrier (no, not the Heisman Trophy football coach), an English wine shop owner living in Paris who decided to hold this competition in the hopes of showcasing what was going on in California at the time. This event changed the world of wine as we know it. Today, California is now home to more than 4,200 wineries – followed by Washington state, Oregon and New York.

We had a fantastic time visiting Chateau Montelena in Calistoga, where we sampled 6 wines that day. Our favorite was the 2007 Cabernet Sauvignon, which made an appearance in the tasting room that afternoon. Unfortunately, we do not have a bottle of the winning 1973 Chardonnay of which can only be found in the Smithsonian's National Museum of American History.

And there is your history lesson for the day. How a wine competition changed the world of wine. Cheers! 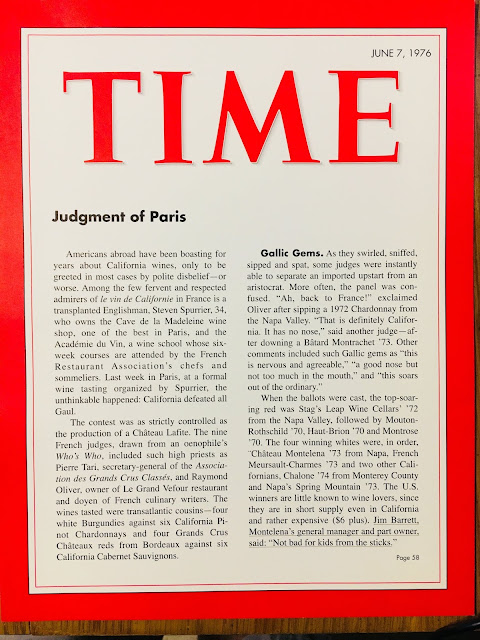